Norah King stood straight in her black stockings, black, low-heeled, laced work shoes, navy blue skirt, white blouse, and full, starched white apron, her thick auburn-gray hair arranged neatly on top of her head in a bun.  “Mrs. Parker . . . may I please have a moment of your time?”

Caroline was stunned to hear one of the floor washers say her name, and surprisingly pleased by the soft Irish brogue in which it was said.

“Mrs. Parker, first of all, I want you to know it isn’t my way to be listenin’ to the conversations ’round about me . . . still I couldn’t help but overhear you’re givin’ that fine red coat away to the poor. And isn’t that a good heart you have now, to be thinkin’ of others?”

Norah and Mary had been keenly eyeing the elegant garment all morning long. Both knew it would be out of place for Norah, a domestic, to request the coat for her daughter, and doing so could possibly put an end to any future work in the brownstone mansion. However, Norah deeply loved her firstborn; so grateful was she for the girl’s uncomplaining nature and helping ways that maternal love overtook propriety. And when Mrs. Parker hurried across the damp entry floor on tiptoe, carrying a vase of fresh flowers from the kitchen to the parlor, Norah stood, wiped her rough, wet hands on her apron, and stepped forward.

The mother of nine had a lump in her throat for what she was about to ask, but self-respect brought her shoulders back, while resolve took a breath, and pride held her chin up, “If it would be all right with yourself, could I please have that beautiful red coat for my daughter, Rosemary?” Norah put her right hand in her apron pocket, placed her left hand over her wrist, and waited.

It was early April, and Caroline Adams Parker busily ordered her housekeeper, caretaker, and cook about the task of spring cleaning with the goal of having everything in order by tomorrow, Palm Sunday. Earlier in the week, curtains and drapes were removed from every window—even the one in the small cellar door—laundered and pressed, or sent out to the drycleaners. Each multi-paned window upstairs sparkled after being washed the day before by Palowski & Son’s–Best Window Cleaners in The Commonwealth, as the sign on their paneled truck advertised. They would finish the job this morning.

Caroline firmly believed in hiring skilled help for specific house maintenance jobs: gardeners, window cleaners, painters, and now floor washers, two Irish women, who usually scrubbed the floors of her husband’s company, Parker Shipping, after hours on weeknights, had come in from South Boston for the day. Norah King and Mary Callanan both had large families, and saw the opportunity to work on Saturday as heaven sent, and a chance to earn a little something extra to help with the children’s Easter clothes.

The Parkers’ live-in help, husband and wife, Rolf and Hilda, were immensely grateful for their employer’s delegation of heavier tasks, so unlike the fate of many other live-ins on Boston’s Beacon Hill, most of them European immigrants. There was prestige in hiring German, French and Swedish. But not the Italians, unless one needed marble work or fine woodcarving, nor the Irish, though everybody knew no one did laundry better thgan they did. Years ago, Caroline’s mother, Rebecca Meriwether Adams—proper and kind-hearted, diminutive in stature but enormously particular—had a white, Chinese rice-linen tablecloth that had been badly stained with red wine. The predicament birthed a favorite family story, which Caroline repeated to Hilda as they sat at the dining room table slipping damask napkins into ivy-embossed silver rings for that evening’s dinner party. The two Irish women, working nearby, but unseen, heard every word.

“My mother was absolutely convinced she’d never be able to use that cloth again. Then Pru Walker suggested she borrow their laundress, Mrs. Finnerty, who wasn’t a bit worried about getting that stain out. And she did. It’s perfect. 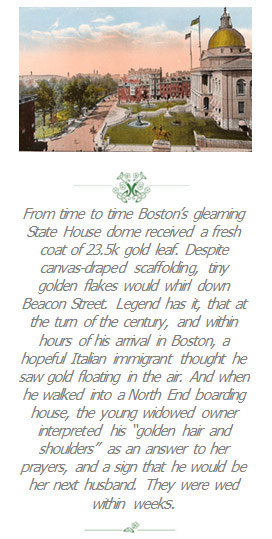 The Irish are positively magical at bringing lost causes back to life.’”

Norah and Mary shook their heads.

“Ya, Mrs. Parker, your mother, she was right. Those Irish ladies have already begun their magic. The entry floor shines like the State House dome.”

Kitchen cupboards, the pantry, and every single closet in the house, were cleared of anything Caroline considered clutter, including her daughter Cordelia’s red wool coat.

“Imagine Hilda, the girl only wore it for a season, and that was two years ago. No sense in having it take up space.” With that she handed the coat to her trusted, long-term housekeeper. “And Hilda, put this on the entry settee with the other things, will you, please?”

After the coat had been placed on the settee, just three feet away from where Mary and Norah were on their hands and knees scrubbing the black and white marble entry floor, Norah whispered, “And wouldn’t that beautiful red coat look grand on my Rosemary?” She dipped her scrub-brush in a bucket of suds and back to the floor. “Sure and you’ve seen her wearin’ the dull brown tweed for years, and now it’s so threadbare we won’t be handin’ it down to her sisters. And haven’t they said so themselves?” Picturing the pretty faces of her Kay and Rita, she smiled, and kept scrubbing. “Oh God in heaven, wouldn’t I love to be bringin’ that fine coat through me front door for Rosemary.”

Praise for The Red Coat:

“The Red Coat is a smashing read, a sweeping look at the ever-changing fortunes of a Southie Irish family struggling in the New World but also depicting the Beacon Hill family with whom they become strangely intertwined because of a red coat. Author Dolley Carlson knows Southie as few writers do and brings that Irish enclave to life both historically and in modern times in all its tattered glory. A must read for Americans who wonder about the lives, the trials, and the triumphs their predecessors lived through. It’s all here in The Red Coat.”

“The Red Coat vividly captures the nuances of Irish-Catholic life in mid-twentieth century America. Reminiscent of a family-oriented Last Hurrah, the novel is full of the quirks of the Irish, wonderfully brought to life by Dolley Carlson, and extraordinarily gifted storyteller who gets hold of the reader and won’t let go.”

– Dermont McAvoy, author of The 13th Apostle: A Novel of Michael Collins and the Irish Uprising

“Dolley Carlson holds her vivid characters with compassionate regard, the lasting gift of The Red Coat. Unafraid to render the shadows of this Boston world, in Carlson’s hands it is also bright and beautiful because it is a graced world, offering with the many cups of tea, also hope.”